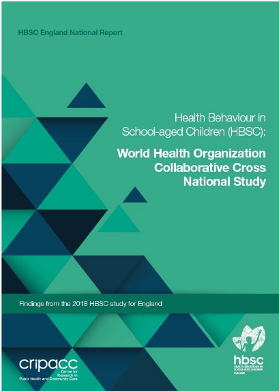 On the 23rd January the latest findings from the Health Behaviour in School-aged Children (HBSC) study for England were published. The HBSC England national report can be accessed here.

The HBSC study is an international study conducted in collaboration with the World Health Organization (WHO). At present, 49 countries and regions from across Europe and North America participate in the HBSC study. Each country surveys a nationally representative sample of young people aged 11, 13 and 15 years old, capturing data on their health and well-being, health behaviours and social environment. The HBSC study collects data every four years allowing trends in young people’s health to be tracked over time.

The HBSC study for England is co-ordinated by researchers in the Centre for Research in Public Health and Community Care at the University of Hertfordshire, and is jointly funded by the Department of Health and Social Care and the Department for Education. England has participated in the last five HBSC surveys (2002, 2006, 2010, 2014 and 2018), with data spanning two decades.

The HBSC study provides an important snapshot of the current health and well-being of young people in England. The data is a useful tool for monitoring the uptake of healthy behaviours and engagement with risky behaviours among young people. The international nature of the study provides the opportunity to compare across countries. Furthermore, as the survey captures young people’s broader social context it allows the identification of social determinants of young people’s health and well-being. The data has contributed to policy debate in England including that on energy drink consumption among young people1 and the role of Personal, Social, Health and Economic (PSHE) education in schools2. Public Health England commissioned thematic reports of HBSC England data to explore the rising number of young people reporting poor emotional well-being3.

The most recent report presents data collected in 2018 from over 3000 young people from secondary schools (state and independent) across England. Key findings include: