As a Registrar in Public Health we are fortunate to have the opportunity to work on a variety of projects in our service placements.  One of the projects I have been working on is the Cancer Joint Strategic Needs Assessment (JSNA). It is a statutory responsibility for Health & Wellbeing Boards to produce JSNAs which assess evidence and local data to determine the health and social care needs of the local population, identify any areas of inequality, and make recommendations for local commissioning and decision making(1). Hertfordshire’s library of JSNA documents can be accessed here.

One of the key areas for improvement which was identified from the cancer JSNA was the decline in uptake of cervical screening amongst women, reflecting the national trend (Figure 1).  Nationally, cervical screening uptake is at a 20 year low(2). 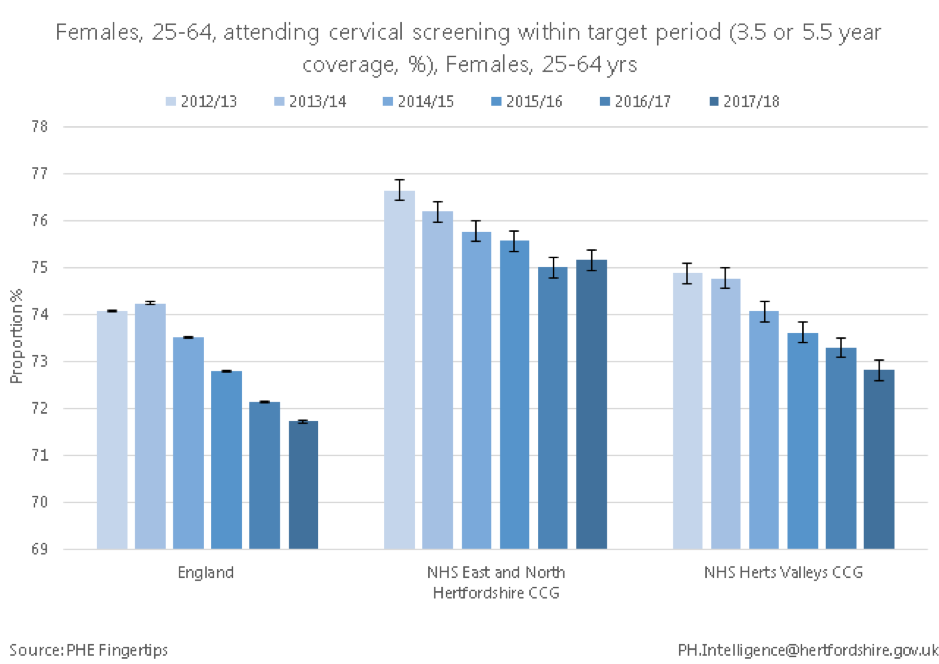 This data only tells us so much. Who are those who have decided not to attend? What are their reasons?

The statistics show us that younger women are less likely to attend for screening, as are those women from Black, Asian, and minority groups, those from LGBT+ groups, and those with a disability. There are many reasons why women from these groups do not attend screening appointments, and these reasons and barriers need to be addressed if we can hope to reverse this trend.

Despite the fact that cervical cancer is the most common cancer amongst women under 35 years old, attendance for cervical screening is lower amongst younger women. Over 30% of women aged 25 to 49 were not up to date with their smear test in 2017, compared with less than 25% of 50 to 64 year olds(3). A survey in 2017 of 3002 women aged 25 to 29 years old, asking their reasons for not attending cervical screening, and finding out what would encourage them to attend. The most common reasons for delaying or not attending screening were: ‘I kept putting it off’ (32.9%), ‘I was worried it would be embarrassing’ (26.7%), and ‘I was worried it would be painful’ (25.3%). The most common factors which respondents stated would encourage them  to attend were: more flexible surgery opening hours (41.3%), being able to book an appointment online (36.9%), friends reassuring you about the procedure (35.1%), and being able to self-sample in my own home (33.5%)(4).  In order to increase uptake within this group, ease of access to appointments needs to be improved, and these women need to be better informed and reassured about the procedure.

In one survey conducted by Jo’s Cervical Cancer Trust, it was found that 63% of the 335 women with a physical disability who were surveyed had been unable to attend cervical screening because of their disability.  Many GP surgeries do not have facilities and adaptions necessary for people with some disabilities to access screening,  and the survey suggests that many women who are physically unable to have the test at their GP surgery are not offered an alternative.

Those identifying as lesbian, bisexual, and transgender are less likely to attend for cervical screening either due to the fear of discrimination by health care workers or because they have been incorrectly informed that they are not at risk of cervical cancer(5).  Some people identifying as transgender are not invited for screening, as they have been omitted from the register due to their recorded gender(6).  A report on addressing inequalities in LGBT cancer screening coverage  was published by Public Health England earlier this year(5).

There may be many reasons why less women from Black, Asian or minority ethnic groups attend for screening compared with White women. One study suggested that factors such as a lack of knowledge about cervical cancer, and the purpose of cervical screening; fear of pain or embarrassment; bad experiences of screening in the past; and difficulty getting an appointment at a convenient time all contributed to a lower screening attendance(7).

The NHS Long Term Plan which was published in January 2019, included a recommendation for a review of the cancer screening programme (8). The interim report was published in May 2019 and recognised the importance of targeting those groups with lower cervical screening attendance(9).  It will be interesting to see what recommendations are made in the final report to reduce the inequalities in cervical screening uptake.

In response to the low screening uptake, Public Health England launched the ‘Cervical Screening Saves Lives’ campaign in March 2019, its first national multimedia screening campaign(2).  Alongside this there was also cervical screening awareness week which took place in June(10).   However, the most effective ‘campaign’ to increase cervical screening attendance in the UK, at least in the short term, was undoubtably reality TV star Jade Goody’s public battle and eventual death from cervical cancer at the age of 27 years old. This raised awareness of the importance of cervical screening in a way that no NHS or Public Health England campaign has managed to achieve, and led to an estimated half a million extra cervical screening attendances between mid-2008 and mid-2009(11).  This year marked the tenth anniversary of her death. Could more have been done to capitalise on this? Has this been a missed opportunity to increase attendance amongst those who could attend but do not because of a perception that they are not at risk, or because they just have not got around to it? As I write this, Channel 4 has aired two episodes of their three part documentary on the life of Jade Goody.  Next weeks episode is due to cover Jade’s terminal diagnosis of cervical cancer. Perhaps this will raise the issue once again in a relatable manner to get women talking about cervical screening.

For more information or to book a cervical test go to: www.nhs.uk/cervial-screening